How to Guide; Launching and Recovery of a Gig Boat

How to Guide; Launching and Recovery of a Gig Boat

The lifting, shifting and launching of the gig is the most arduous part of any outing and arguably harder work than a Rob Santucci pyramid session. In fact, the marines at Lympstone even have a fitness test called “the beast” where a team of seven simulates pushing Avocet up a beach of dry sand. No one has yet to complete this test*.
There’s no “I” in team (but there are two in “staying in bed”…) so you need to act as a crew. If you put in the same amount of effort as your crew mates you’ll soon be on the water or back in the café dripping water on the floor as you order a coffee.
The correct and proper way to launch and recover can be found in the new handbook, so for all our sakes, read it.
Golden Rule: Don’t try to launch or recover a gig without a minimum of a full crew and a cox – unless you are training for world’s strongest man (which you aren’t, so don’t). Begging, stealing and bribing other members to help out is encouraged.

GETTING TO THE WATER
• One person must take charge of the lift and be responsible for “counting” the lift. Top Tip: Conversations along the lines of “are we lifting ON three or AFTER three?” should be done in advance.
• One person will be required to take charge of each launch trolley – this person doesn’t need to hold a clean driving licence but should try to know left from right or at least have “L” and “R” written on the back of their hands.
• Lift the stern first (that’s the arse end) on to a trolley ensuring that the keel sits firmly on the support.
• Keep the boat level – It shouldn’t look like the Titanic after encountering an iceberg.
• Lift the bow (front) onto the front trolley ensuring that the bow sits firmly on the support.
• Head for the wet, cold, wavy stuff – but don’t go faster than a slow walk.
• Things to avoid include parked cars, pedestrians, lamp posts, sea scouts on parade, benches, pensioners, children eating ice-cream, squatting dogs and refuse bins. Seagulls are worth 20 points each and are fair game.

LAUNCHING THE GIG
• Always remember beach and slipway etiquette as other users may be present. Hand gestures towards jet skiers for ruining the peace should be avoided (if at all possible).
• Exercise caution as the surfaces may be slippery or, if on the beach, conditions underfoot can be uneven and soft. Wear sensible footwear. Crocs are sensible – not fashionable, but sensible.
• Check that the bung is correctly inserted. If you miss this step, once rowing head for shore, bailing out the water as you go, beach the gig and then insert the bung. Look at each other in turn and silently assign blame…
• Move the gig with the stern trolley wheels into the water – for most people this is about knee high; for George its around neck height.
• At this point, you’ll realise that your wellies aren’t as tall as your thought they were and you’ll have wet feet. Watch the cox being loaded in to the boat via a fireman’s lift and instantly feel jealousy.
• Going too deep might cause the trolley to float up under the gig making it difficult to remove.
• Using the same counting system as before lift the stern and remove the trolley. Try not to count on your fingers as this hinders lifting the boat.
• Manoeuvre the gig further into the water and lift the bow off the trolley.
• Keep a firm hold of the bow of the gig. Watching it float away into the sunset might be a serene and calming vista but you’ll have to answer to the Treasurer if you lose it. I’ve seen his cross face – you don’t want to.
• Stow the launch trolleys making sure that they do not obstruct other beach or slipway users and will remain clear of any incoming tide.

RECOVERING THE GIG
• Do the same as the launch procedure – but backwards.
• Once the bow is on the first trolley the gig should be “walked” up until the stern grounds. Lift and carry the stern of the gig up the beach/slip for about 6-10 feet. This makes it much easier to insert the rear trolley as it will not float.
• The bung should be removed as soon as the gig is on the trolleys to allow water to drain as soon as possible. This trickling noise will make you need to use the loo. You’ve been warned.
• Ensure the trolleys are properly inserted once clear of the water, if necessary, stop and reposition.
• Finally, Sweat and swear up the beach / slipway until the gig is back in its rightful place. Then remember that there was another session directly after yours and you could have left it at the waters’ edge. Swear loudly.
…It’s as simple as that. With the winter weather keeping us all shore bound it’s a good opportunity to grab a cup of tea, fire up the heating, relax in your favourite armchair and read the handbook – Its important. 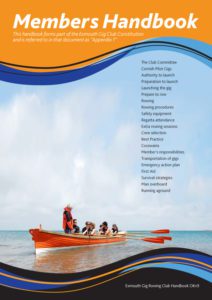