Crews battle Storm Freya to most successful ever 3 Rivers 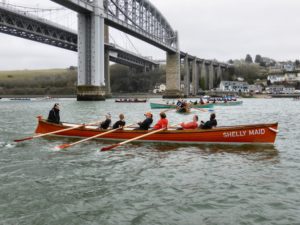 Five Exmouth Crews met early Saturday under the shadow of Brunel’s Tamar rail bridge to take part in the first and longest regatta of the season; Caradon’s 3 Rivers race. But the 6 miles course distance wasn’t the only obstacle to overcome.

With a yellow warning for wind and storm Freya about to hit the south coast the organizers decided to bring the event forward by half an hour in an attempt to get both the Ladies and Men’s races done before the tide turned and the wind reached unsafe levels.

At noon the Ladies Race started with three crews representing Exmouth Gig Club; Ladies A in Shelly Maid, Ladies B in Endurance (on loan from Bideford) and, new for 2019, Ladies C in faithful old Rodney Bey.

Due to the sheer volume of boats that take part in this event (77 in the Ladies race) boats start in groups based on their finishing position at Scillies; however, the finishing positions allocated on the time taken to complete the course not the number of boats behind you.

Ladies A started first with the wind at their backs heading up river. As Ladies C have not competed at the World Champs (yet) they were placed in the same group as Ladies B. Not only were the crew in Ladies C new but it was also the first time cox Dave Lomas had taken up the ropes in anger. Keeping out of trouble, motivating the crew and picking the best line is never easy and conditions really made this a baptism of fire Dave.

Once the ladies had made the turn on leg one they had to complete over half the course against the wind which was now gusting at over 18mph. By the half way stage, as they passed under the Tamar bridge for the second time, Shelly Maid was locked in battle with Gibraltar with both crews determined not to lose ground. By the time both boats made it to the sailing club Shelly was just edging ahead but did they have enough in the tank to hold off another “big ten” from their rivals? 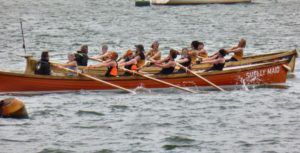 Ladies B on the other hand had, by the same point on the course, made themselves some room. Coxed by Rob Santucci their aim was clear – they had their sights on closing the time gap between them and Ladies A. Encouragement from Rob could be heard from the shore – even against the wind! 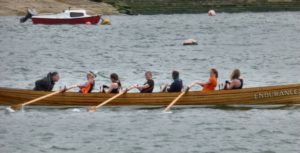 Ladies C had their own battle to fight. Being in the last group with a wind speed growing every minute they had three boats behind them which they were determined wouldn’t pass. At the half way point one of the three boats behind called it a day but Rodney Bey kept on against the building gale. 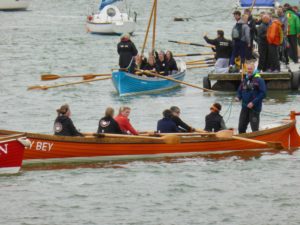 As the final stroke side turn was made it was a clear sprint to the finish – All three crews pushing hard for the line. Once all crews / clubs had finished and dust had settled it became clear that Exmouth ladies had all done themselves proud.

Ladies A gained a place from their 2018 position taking 53rd. Ladies B shot themselves up the leaderboard a whopping 22 places to 54th and just 8 seconds off the pace set by Ladies A crew! Ladies C finished in a very respectable 1hr and 33mins fending off three other crews and taking 74thposition.

Then it was the turn of the Men – Men’s A in Shelly Maid and Men’s B taking Rodney Bey. Both crews had clear goals they had set themselves; Men’s A wanted to finish under the hour mark and Men’s B wanted to beat Men’s A!

Shelly Maid were to start just two groups ahead of Rodney Bey and but on the first stroke Ollie Knights (Seat 1) had a pin break – not the dream start. Due to the length of the course the start isn’t critical but getting ahead of the pack does allow you to get clear water and stay clear of the melee at turn 1. With pin changed Shelly Maid, coxed by Karen Mossman, set their sights on getting back to the head of the group and after completing the turn at the far end of the course had reeled in all but two of the crews in their heat. 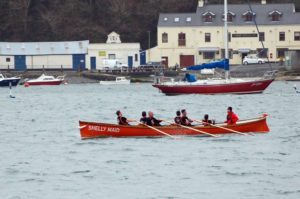 Men’s B in Rodney Bey, coxed by the very experience Polly Williams very quickly got into their rhythm after a solid start. With local rivals Sidmouth breathing down their backs in Little Pickett they got round turn one safely and started the hardest and longest leg of the race.

“…after making the turn and heading back you can see what look like military buildings on the Devon side of the water. With the wind and the waves It felt like we were never going to get past them!”

..but pass them they did and at the half way point Men’s B were pulling hard and making solid headway in worsening conditions. 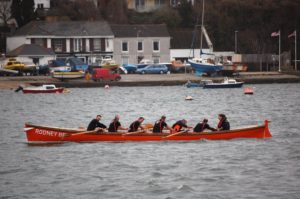 Just before the final turn Men’s A took Chesil (from Portland Gig Club) and then with the wind and tide at their backs upped the rate for a “Steve Redgrave finish” (As termed by Steve Williams – Seat 3). Men’s B followed suit finishing the race exhausted but having known they’d put in their all.

Men’s B in Rodney finished 9 places up from 2018 taking 67thposition in a time of 1hr and 4mins. Men’s A managed to break the hour mark they were looking for finishing in 58mins and claiming 48thspot.

Overall every crew had improved on the previous year making this the most successful year for Exmouth at the three rivers regatta. 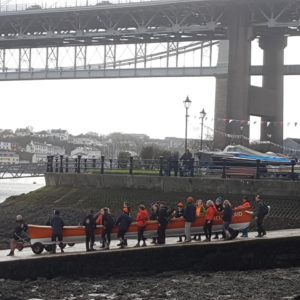 Big thanks to Caradon for organising a very slick event, to all our coxes and towers and to all the rowers who competed on Saturday.